This may well be my favorite fragrance post of all time.  The utter joy of fragrance, experienced by five different groups of people, in the same gas station bathroom.  It was also one of my most liberating posts in terms of dialog and characters.  I truly loved these imaginary people.  I thought I had lost the post, but it was only the picture which disappeared, formerly on Photobucket.  Once again repaired, for your fragrant reading. 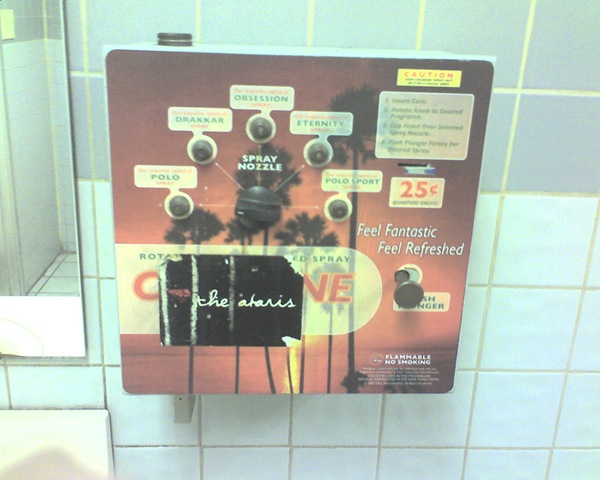 …you ever used one of these bathroom cologne machines.  But the real question is:  do they have these things in the ladies’ room?  Inquiring minds want to know…

I believe that I’ve seen this particular machine before.  It’s located in a BP off of I-70 at the Cloverdale/Something exit in Indiana.  I was in there with my son, who’s privy to my alternate identity as Cologniac, the Redneck Perfumisto.  I’m pretty sure that I saw  this monstrosity when the word “COLOGNE” was fully intact.  In any case, my son was thoroughly embarrassed that his old man would take a picture of this horrible thing.  Tough nuts, junior.  It’s bloggable!

Being a person who would NEVER use a counterfeit scent, I am forbidden by my morality from sampling these “shot-juice” imitations.

However, that does not prevent me from channeling those who would use them – for “literature’s” sake.  Here for your enjoyment:  five tales of perfumery, fragrante derelicto.

[Warning:  This is the men’s room, where talk is cheap, and dirtier than the floors.  If the F-bomb makes you queasy, you should definitely skip the rest of this post.]

Skip:  Hallelujah!  A rubber machine!  Oh, dude, we are so laid!

Biff:  It’s a stupid machine that sprays cologne in your face, that’s what.  There used to be a rubber machine in here.  I’m positive there was.  Aw, crap.

Skip:  You mean, no rubbers?

Skip:  Maybe one of the dials is for rubbers.  You know – like maybe the last one is for Trojans.  It’s a popular brand.

Biff:  Yeah.  Like Polo.  For that big Polo in your pants.

Skip:  So what are we gonna do?

Skip:  Maybe we can just put on some cologne.

Biff:  I’ve got it.  Polo.  We lay it on heavy.  And I mean heavy.  These chicks are so damn drunk, they won’t smell it unless we do a couple of shots each.  When they ask us why we put it on, we tell them that we always put more on when the evening wears on.   REAL sophisticated-like.  We ham up the rich frat boy thing, and how we wouldn’t do it unless we were serious about them.

Biff:  Break out the quarters, douchebag.  You’re gettin’ some tonight.

François:  Oh, God.  How did we get stuck here?  Do you believe the driver?  I think he’s lying about the transmission.

Maurice:  Come on.  You smelled the smoke.  Big time.  If it’s not the transmission, it’s just as bad.  Trust me.  I know cars.  Smoke that dark is always a bad sign.

François:  Why not call Paris?  They’re awake.  And they won’t hook us up with another lemon.

Maurice:  No way.  This is the Americans’ thing.  It’s their launch.  If we call Paris, it’s a shitstorm.  Trust me.

Maurice:  Whatever.  I’ll call when we get to the room.

François:  Shit!  Look at this thing!

François:  Eternity.  That’s not so bad.

Maurice:  Well, the only thing on here that I could stand is Drakkar.

François:  Watch out.  There have to be three K’s in the name.

Maurice:  Good one.  But you should lighten up on the anti-Americanism.  Everybody is so damn weird about race and sex here.  You never know if some Yank is going to piss his pants with laughter, or turn red and shit in them.

François:  You want to try it?

Maurice:  OK.  Call it research.  You have a quarter?

François:  It’s the one with Washington, right?

François:  I think I got some back in that bar.

Maurice:  Yeah.  Come to think of it, we smell like American cigarettes.  You’d better spray some Eternity.

Maurice:  OK.  Hold your nose and hope for the best.

Billy Ray:   Man, I don’t think I’ve ever seen you this drunk, Bobby.

Bobby:  I WANNA GET LAID!

Billy:   For Chrissake, Bobby!  Keep it down!

Bobby:  I want to make sweet love to the best girl in the whole damn county.  And that girl is…

Billy Ray:  Damn, B-Boy.  When are you gonna give up on that sweet little tart?  You know you ain’t never…

Bobby:  I ain’t NEVER gonna give up on Kelly.  She’s got my name on her heart.  She just don’t know it yet.

Billy Ray:  God, Bobby.  You can’t even hit a sink that’s two feet wide and with a mirror for a backstop!

Bobby:  I need a rubber.  In case we run into Kelly tonight.  I don’t want her to get pregnant before we’re all married and… and…

Billy:  It’s not a rubber machine.  It’s a cologne machine.

Bobby:  You mean it?

Billy Ray:  That’s right.  This is one of those new machines that puts the rubber right on you.

Billy:  That’s right.  You just whip it out and stick it in front of the rubber brand that you want.

Billy Ray:  Sorry, amigo.  They only have 5 kinds.

Bobby:  How about Trojans?

Billy:  Bobby – for your first time out, I recommend Obsession.

Bobby:  Is it good?  Only the best for my Kelly.

Billy Ray:  With pleasure.  Hold the door, Billy.  We don’t want no asshole disturbin’ the moment, if you catch my drift.

Billy Ray:  Well, you could just whip it out, or you can drop your drawers.  It’ll feel cool – like some nurse who just washed her hands is puttin’ it on you.

Billy:  No, man.  These are space-age rubbers.  It’ll stay with you for a few hours, and then it just disappears on its own.

Billy Ray:  Well, if we don’t run into her tonight, we’ll just keep this our little secret until the next time, OK?

Manager:  OK, people.  There’s no smoking in there.  Let’s just finish up and get on with our business.

Billy:  10-4, good buddy.  We’re finishing up right now.  But I’d recommend keepin’ clear of the room for a few minutes, if you know what I mean.  Peee Yuuu!

Jason:  Sure you can, baby!  Nobody will know.

Melanie:  Oh God – there’s somebody in there!

Melanie:  Well, then at least lock the door.

Jason:  No problem!  Check this out!

*** Jason lifts the door in the frame and pounds a small stack of pennies into the crack.  ***

Melanie:  Are you sure that’s going to work?

Jason:  Absolutely!  I do it all the time.

Melanie:  You mean you take girls in here all the time?

Jason:  No – pennying doors.  I learned it in the dorm.

Melanie:  What if they kick in the door?

Jason:  You want quick?  You got quick.

Melanie:  How many is that today?

Jason:  Well, having the hottest girlfriend on Earth helps.

Melanie:  Do you really mean that?

Jason:  Absolutely.  God, Mel – you’re all I can think about.

Melanie:  Me too.  I can’t believe this is happening.

Melanie:  You mean you can get cologne out of that thing?

Melanie:  Are they good?

Jason:  You want me to get some?  It’s only a quarter.

Jason:  Hang on.  Let me find a quarter.

Melanie:  Can I push the pushy thing?

Jason:  Sure.  Just let me get my neck up next to the sprayer thing.

Jason:  OK.  Just push really hard and fast so it comes out quick.

Melanie:  Where have I heard THAT before?

Jason:  Well, it’s not like you want too much.

Melanie:  Let me smell your neck.

*** Jason puts his arm around Melanie’s waist.  She touches her lips to his neck. ***

Jason:  What do you think?

Melanie:  Oh, Jason.  Do we have time for another one?

Mike:  “I hope you kids are planning on paying for that!”  Ha-ha.  What a loser.

Dan:  It’s not like I’m planning on stealing it – yet.

Jimmy:  “No merchandise in the restroom.”

Mike:  You call this crap merchandise?  As if!

Jimmy:  What’s the deal?  Why don’t people trust us?

Jimmy:  Big-time!  I light up my stupid sister’s stuff all the time.  It’s not as good as gas, but it burns OK.

Jimmy:  Hell – I’ll drop a quarter for a good fire.

Dan:  Which one should we light up?

Mike:  Try Polo.  The nozzle isn’t fuckin’ right next to the thing you push.

Mike:  That was fucking awesome!

Jimmy:  I got another quarter.  You want to do it again?

Jimmy:  Yeah!  The old “Off Flamethrower”!

Manager:  You kids aren’t smoking in there, are you?

This entry was posted in Art, Blogging, Fragance, Fragrance Reviews, Travel. Bookmark the permalink.
%d bloggers like this: